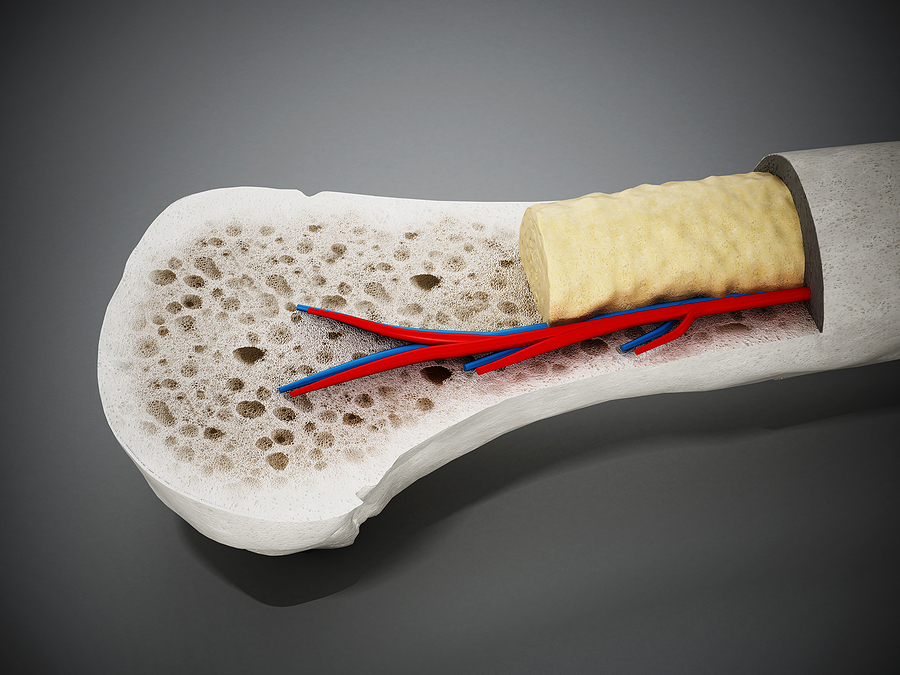 Bone marrow, the primary site of hematopoiesis, is found in the cavities of cancellous bones and the medullary canals of long bones. There are 2 types: red marrow (hematopoietic with abundant blood cells) and yellow marrow (predominantly filled with adipocytes). Human marrow composition changes with age. In the young, the entire bone marrow is red, as there is increased blood cell production. As age increases, there is a gradual change to the yellow marrow variety. The yellow marrow can revert to red marrow when hematopoiesis is needed (e.g., anemia). The red marrow, by hematopoiesis, produces about 6 billion cells per kilogram per day. The process relies on hematopoietic cells (stem cells and progenitors) producing mature effector cells (lymphocytes, platelets, granulocytes, erythrocytes) with the aid of nonhematopoietic elements. Production is regulated by cytokines released in the bone marrow environment and feedback from target tissues. The marrow structure allows hematopoiesis to take place in the extravascular area, and after staged differentiation, blood cells are released into circulation.

Bone marrow is the spongy tissue found in the medullary canals of long bones and the cavities of cancellous bones.

Structures that provide a microenvironment that supports the differentiation of hematopoietic cells and proliferation of blood cells:

Hematopoiesis starts with an HSC, which is prompted to divide and differentiate with appropriate chemical stimuli (hemopoietic growth factors).

No comments to show.